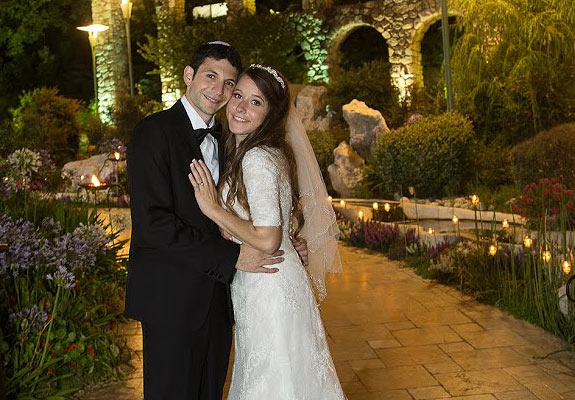 When I found out that I would be in Israel for Josh & Zahava’s wedding I was not only excited to see lots of high school old friends, but I was thrilled to celebrate and meet the sweet girl who stole Josh’s heart. I loved getting to know them even better as a couple putting this post together. Here are all the details of how these two North Americans got their wedding together in Israel.

How did you guys meet?

“We met in the greatest place on Earth – Israel.

Aliyah [moving to Israel] was pretty much always in the cards for Josh. He went to an amazing, Zionistic school and visited Israel many, many times throughout his childhood and early adulthood.

For me, it was kind of a fluke – I went to Israel once, when I was eight, and I wasn’t a huge fan of the food. But upon returning as an adult, I fell irrevocably in love with the place and am so glad I did because I found in it not only a home, but a partner as well.

Josh had been living in Givat Shmuel and attending IDC for a couple of years by the time I made my way over there. We met at a party and became friends, but that didn’t last long =)”

I fell irrevocably in love with the place [Israel] and am so glad I did because I found in it not only a home, but a partner as well.

Zahava turned to each of her friends for help and inspiration to bring together her perfect day.

“While planning our wedding, I turned to my friends for inspiration. One of them helped me choose a color, another helped me with song options and another came to the tasting to help select the menu. I’m lucky to have super creative friends who have great taste and are always willing to lend a hand.”

“Unfortunately, we couldn’t exactly do much about the cats that started brawling during our chuppah =) but it wouldn’t be israel without your screaming cats.”

“I was also inspired by a lot of the wedding photos on Pinterest, many of which feature rustic and serene locations. Josh and I both immediately agreed we wanted an outdoor wedding with lots of greenery and nature – nothing too contrived. And we knew we wanted a venue outside the city – where you wouldn’t hear cars or anything like that. Unfortunately, we couldn’t exactly do much about the cats that started brawling during our chuppah =) but it wouldn’t be Israel without your screaming cats.”

What were some challenges for planning a wedding in Israel as Olim?

“Well, when we first arrived back in Israel (he proposed in the States), we thought we had time to breathe and take our midterms before getting to the wedding plans. But when I called a few venues to get a feel for what we were dealing with, I discovered that many of the halls were already totally booked for June, the month we wanted. So I had to start planning a wedding while taking finals – and without our families here to help out, it got a bit overwhelming at times. The language barrier was another issue, but Josh speaks Hebrew very well and for me, it was like taking ulpan in the real world. I think my Hebrew significantly improved after trying to talk seating arrangements, centerpieces and all that fancy stuff with the hall manager. I’ve still got a ways to go though.

Another challenge was picking a date that worked for all our friends and family overseas. That was pretty much hell. But we knew from the get-go that we wanted to get married in Israel and start our life together in the place we would live it. Eventually, we settled on June 18th and those who couldn’t make it were able to tune in via livestream.

Not everything can go according to plan. What do you do when your bridesmaid’s dress is lost with her luggage?? Zahava found out:

“One of the final challenges came when the airline lost my friend’s luggage, which contained her custom-made lavender bridesmaid dress along with everything else she had brought. We turned to social media and I’m pretty sure the entire english-speaking Israeli population was looking for a purple dress at one point. Thank God she found a dress in the perfect color, but it was definitely nerve-wracking. I remember sitting on Masada the day before the wedding, pleading with the airline over the phone to do everything they could to find the suitcase and get it to Israel before the wedding. ”

What were some traditions that were most important to you?

“It was really important to us not to see each other before the badeken. The badeken is my favorite part of every wedding – when the chat an [groom] and kallah [bride] first see each other – it gets me every time. At the same time, we wanted pictures together while we still had the daylight. We wrestled with the decision for a while and decided to take pictures together without seeing each other. It involved a blindfold and a wooden board and it got complicated at points, but it was 100% worth it!”

What was each of your favorite moments of the day?

“My absolute favorite moment of the wedding was seeing Josh after spending a week away from him. The badeken was such a beautiful and uplifting experience; my loved ones all around me, my soon-to-be husband leading a parade of dancing friends and family. I can’t remember ever feeling so loved and so safe. He whispered in my ear, “I can’t believe this is happening,” voicing the exact sentiment I was feeling at the time.

Another great moment was surprising him with a flashmob! At weddings, the bride and groom’s friends always go all out for them to show them how happy they are for them and how much they love them and I wanted to do the same thing for Josh. I chose a song that was fun, but also expressed how much he means to me (Still Into You by Paramore), and seeing his face when I joined the mob was priceless.”