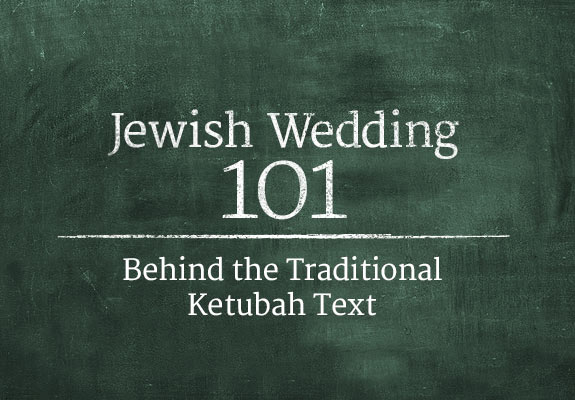 Below is a list of the major items in a traditional ketubah, in the order in which they appear.

o The so-called ‘alimentation’ clause, in which the groom promises the bride that he will “work for thee, honor, provide for, and support thee, in accordance with the practice of Jewish husbands”; o A promise of mohar – the money a groom sets aside for the security of his wife, in the event that their marriage is dissolved. During the Talmudic period the rabbis fixed a minimum amount for the mohar (200 zuzim), to ensure that even very poor women would be adequately protected;

o A testament that the bride has willingly accepted this proposal from the groom;

o The dowry that a bride’s father has bestowed upon her. (Note: the dowry is given to the bride to be used specifically as her contribution to the marital household. The bride can in additional own private property, which remains hers alone and is not mentioned in the ketubah.) This dowry is the nedunya or naddan. Initially the ketubah contained an itemized list of the moneys and other goods included in the dowry, but over time this was replaced by a standard estimate of 100 zuzim;

o A promise of an additional gift, sometimes referred to as tosefet ketubah, that the groom made to the bride. This mattan matches the dowry sum, and thus is also listed as 100 zuzim.

o The establishment of a lien on the groom’s property, sufficient to ensure that he can meet the obligations of the mohar, nedunya and mattan. In essence, this makes the ketubah into a document akin to an insurance document – the groom does not give the bride the monies listed here outright, as a gift, but promises to provide them in the case that their marriage is dissolved (either through divorce of upon his death). The ketubah ensures that the bride will not be financially devastated if her marriage should end.

o A testament that the act of kinyan, or act of sealing the ketubah document, has occurred. In order to ensure that the ketubah was treated as an authoritative legal document which could mandate the transfer of property described above, the rabbis required that there be an act of formal acquisition associated with the marriage agreement. It is important to note that the groom does not purchase the bride – no such relation of ownership is possible or permissible in Jewish law. The kinyan is a symbolic acquisition and must occur in full view of the ketubah witnesses before they sign it. It is usually signified by the groom’s acceptance, and subsequent return, of a token object such as a handkerchief.

o Concluding clause which summarizes the terms described above.

Other laws and customs which govern the traditional ketubah: o The ketubah, once signed and read at the wedding, is given to the wife. It is her guarantee of protection, and so must always remain with her for safekeeping. In no case can a husband keep a ketubah for his wife.

o The witnesses must sign immediately below the ketubah text, so that no words may subsequently be added to alter its meaning. Similarly, any blank spaces in the ketubah text must be filled in with a dash, and the last word of the ketubah should extend to the end of the line on which it is written. (This is similar to the practice of drawing a line after specifying the quantity on a check, so that it may not be tampered with and altered to a different amount.)

o A couple can only cohabit if the wife is in possession of her ketubah. Should it be lost or destroyed, a replacement ketubah (known as a ketubah di’irkhesa) must be issued before they can resume conjugal life.

o In contrast to the Torah or many other religious documents, a ketubah need not be written by a specially sanctioned scribe (Sofer) or written on parchment (klaf). This is because the ketubah is technically considered a legal document rather than a religious item (although it is used in a religious ceremony).

o The practice of illuminating the ketubah, of decorating it and making it pleasing to the eye, is mandated by the Jewish custom of hiddur mitzvah. Hiddur mitzvah is the principle that material objects used in the performance of religious obligations be made beautiful. While decorative ketubot have proliferated recently, they have a long history: the earliest known illuminated ketubah dates from the 10th century.

o There is a special type of ketubah that is issued in the case that one remarries one’s own former spouse.