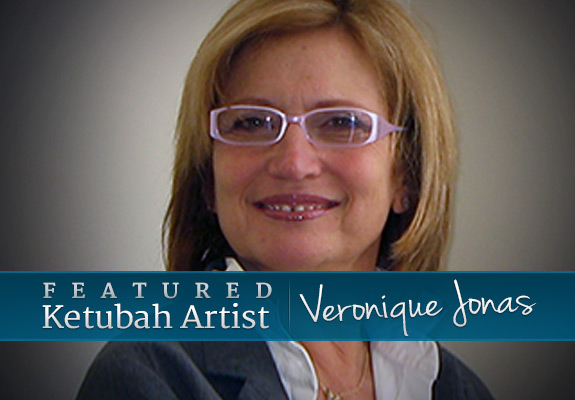 There is so much I did not know about Ketubah.com’s very first Signature Collection artists, Veronique Jonas. Her art is inspired by ketubahs from different parts of the world, and those dating back to the middle ages. And we also share a common love for paper cut ketubahs. Here is an inside look behind the work of Veronique Jonas.

What has inspired your Ketubah art work? “I began doing Ketubah art work about 12 years ago when my own daughter was getting married. I just wanted to create something special for them. As an artist I could not think of anything I wanted to do more. I did a lot of studying and research about Ketubahs. I had always been interested in the ancient art of illumination and especially the Jewish texts. I have been very involved in my synagogue, but was a late bloomer regarding Jewish studies. I had an adult Bat Mitzvah which really got me going in that direction. I would say my Judaic art work, as well as my Ketubot, were inspired also by my 18 years teaching in the Solomon Schechter school.”

An adult Bat Mitzvah, how old were you and what was that like?
“I was 40 and it was a transforming experience for me, as I had never had any formal Jewish education. I grew up in the Congo and though we learned to read Hebrew, further Jewish learning never happened for me.”

Why Ketubahs as an artist?

“After that first Ketubah I became hooked. A Ketubah is the ultimate tangible symbol of the love between two people. Much like a wedding ring or a Chuppah, it embodies the words and the images that make the union of two people so unique and so special. It is also the first object that a couple chooses and owns together officially.

As an artist there is so much freedom in creating a Ketubah. An artist can express himself either superficially and decoratively, or very deeply through symbolism, mysticism, and spirituality.”

And that is truly something you see through Veronique’s unique and painterly works.

Your ketubah “My Beloved is Mine” is still one of our most popular ketubahs. Why do you think that is? What was the inspiration behind it? “I know! I still cannot fathom why! I created it with the same ideas, the same technique and the same inspiration as the others.

Perhaps it is the colors, or the love birds directly over the couple that is almost ethereal – I don’t know….”

Are there any other kinds of work you are interested in, or are currently working on that you are excited about?
“I am very excited about my new ketubahs that will be coming out soon. These are based on Mandalas,
which are a symbol of unity, continuity and eternity. I love creating these as it takes me to a personal meditative place as I am working on them.

Other than Ketubah art, I am constantly painting and growing as an artist in many different directions. I have become an avid Plein Air Painter. I continue to do expressionist works as well.
My work is all about color, as is seen in my Ketubah work.
One of the things that I am working on, and am really excited about, is the formation and birth of the Texas Jewish Arts Association!  Who would have thought that the words Texas and Arts and Jewish would all come together in one name? This is an amazing phenomena and promises to become a great success.” This is “Sarah’s Sacrifice” which hangs at the JCC. She explains, “This was my contribution to a 2005 artist exchange in the Northern Galilee. It depicts the sacrifices that mothers make when their sons go to war – the images of the solders are actual pictures of fallen young men who lost their lives both in Israel and the US army in Iraq.” “Visions” is a painting commissioned by Congregation Shearith Israel to commemorate their 100th Anniversary that Veronique had the great privilege of painting.

To see all of Veronique’s Ketubahs at click here!


Such a beautiful affirmation for you and your gift and love.
Continue to go from strength to strength, together with your family.
All the very best, Ethne Freedberg.


For others reading this, I Google translated your beautiful message Maggy! “Your art represented who you are:
Full of love, generosity, spirituality and talent.
Congratulations my dear cousinette” Thank you for checking out the blog and this great feature!


Veronique ton talent est extraordinaire, you are a very special person, kind, gentle and always smiling and one can see it in your art work ….. We missed you in Rhodes this summer! Best regards from Cape Town


Thank you so much Rina! We couldn’t agree more!